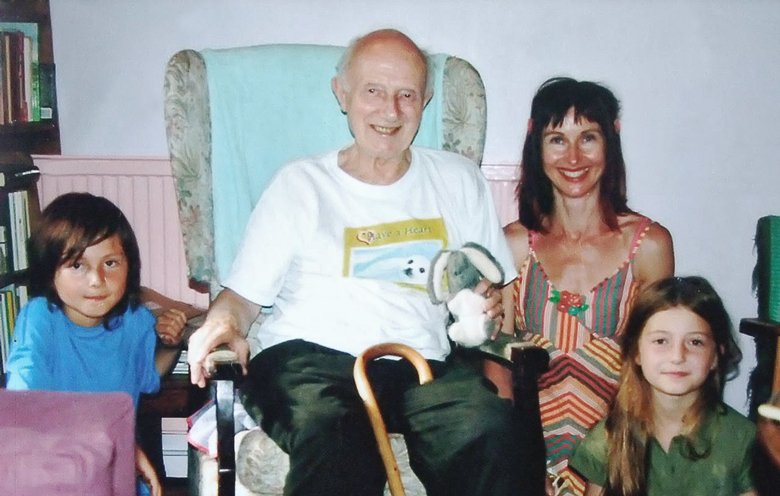 A light has gone from the world. Christopher Freeman passed away early on Monday 16th August at home, surrounded by those he loved, looking out over our small garden to the open blue skies beyond. On 11 September he would have been 89. To many he is known as the creator of the Science Policy Research Unit (SPRU) and a founder of the theory of innovation, the economics of science, and the systematic study of long-term movements in economic growth, for which the world is in his debt.

As his children, we knew more. Son of Arnold, Sidney Webb’s secretary and an early pioneer of the Workers’ Educational Association, Chris left school as an idealistic communist. Plunged into war, he was spared none of the horrors on the Western Front or in the Camps he entered with the advancing allied forces.  Witness to the worst and best of what humans could do to each other, and propelled by great love of humanity, nature, and art, he sought to build a new world with his wife Peggotty, a socialist and talented linguist of American and German Jewish parentage. Blacklisted in academia, he embarked on the life of a working class organiser, first with the WEA in Clydeside, then the Daily Worker, followed by the Society for Cultural Relations with Russia.

His close contact with inner circles of the German communists had already led him, sadly and with great pain, to conclude well before he left the party in 1956 that it was not the vehicle for a future he never ceased to work for. A spell with the Post Office and then the London Export group, specialising in trade with China and Russia, opened a door at the National Institute for Economic Research. He soon dedicated himself to marrying economics to science, which he saw not just as the vehicle of enlightenment but as the means end poverty and suffering worldwide.

At the invitation of Sussex Vice-Chanceller Asa Briggs he established SPRU in 1966. A twin of the Institute for Development Studies, it was born in an atmosphere of renewal driven by an alliance between the Mitteleuropaische intelligentsia that poured into the country before and during the war, and the spirit of scientific endeavour that had shaped Britain from the Industrial Revolution to the apocalyptic discoveries of wartime.  These pioneer institutions were wrought almost from nothing, the joint work of a band of fellow-idealists from all countries and walks of life who wandered in and out of our house in bewildering numbers, many remaining our friends today. His engagement with this ‘invisible college’ of scientists and political theorists framed what was becoming postcolonial Britain; its outlook is conveyed in a lecture on J.D. Bernal singled out for us by several of the hundreds of students and researchers whose rise to eminence took them through SPRU’s portals. Link to Chris discussing Bernal and the Social Function of Science.

His remarkable partnership with Carlota Perez  launched another chapter of this story. The doubts and fears that shaped his young years still haunted his children. The shadow of the Bomb still hung over us all, while cruel invasions, barbaric oppressions and grinding poverty still stalked the world. An emerging environmental crisis was already becoming evident. For Chris, science was the means to human liberation, but required governance, direction, and institutional support to put it at the service of the poor and forestall its abuse by the rich. He poured out papers and ideas. His world view brought him almost visionary foresight, bringing to attention issues only now entering popular discourse. His devastating critique of the OECD’s 1976 McCracken report was one of the first clear economic judgements that postwar growth had come to an end, and would not return without conscious state and institutional intervention. Even as the Soviet and Eastern Blocs fell apart, he was by the end of the 1980s predicting the Chinese Economic miracle. He began writing about green technological revolution in the early 1990s; a remarkable interview, whimsically published in 2000 as If I Ruled The World, outlines a manifesto for a hypothetical ‘first woman president of the USA’ to be elected in 2004, which could easily serve as required reading for Obama’s advisors today.

Professor without a doctorate, his tolerance, aversion to elitism, and his engagement with the personal lives of his friends and colleagues is legendary. Yet it was not a casual or accidental personality trait but the outcome of reflection on the human costs, witnessed first hand in his youth, of acting otherwise. Appreciation and acceptance of diversity were woven into his approach to life as much as theory. As a crabbed neoliberal dogmatism began to close in on his profession, he joined his name to the first modern call for a return to pluralism in economics, published in the American Economic Review in 1992. The breadth and depth of his gifts to economic theory is an enduring testimony to an inspiration which helped so many others, whether of his mind or a contrary one, to give of their best.

Chris’s love for the world was witnessed by all he came in contact with, especially his five children, his five grandchildren, his first wife Peggotty, his second wife Maggie, and his widow Carlota. A nature-lover long before it became fashionable, he was a passionate and active member of the Royal Society for the Protection of Birds. At the time, we may have complained about a succession of far-from-conventional birdwatching holidays in marshes, windswept seashores and probably, were it not for Peggotty’s intervention, sewage farms, but our time spent learning bird calls and listing strange species has brought its reward: in every distant cry from every creature flying overhead to distant places, we hear the voice of our wonderful father, free at last.

Lieutenant-Captain, father, comrade, Professor; may the world return the love you gave it.